After a long weeks worth of silence I'm back, and equipt with photos and stories from the last week.

We shall start with a word of warning:
BE AWARE OF RUSSIANS BEHIND THE WHEEL!

1) In Russia, a pedestrian man green light means, 'walk over the road'. It also means, 'cars don't have to stop either and can intersect the 'pedestrian' path ahead of you.' Thus, every time one crosses the road here, you are battling with not only the task of threading your way through the blockade of pedestrians coming towards you, but also with not falling over the tram lines filled with water- and of course the idiotic cars that insistently drive through the ever contracting gap between you and the oncoming people from the other side of the road! It really is quite a palava and daily challenge.
NB: Tankers also live by these rules, and even being a sole pedestrian crossing the road won't stop them in their tracks !

2) The parking it hysterically outrageous, and again, this is a common occurrence, nay, normality for drivers in Russia: 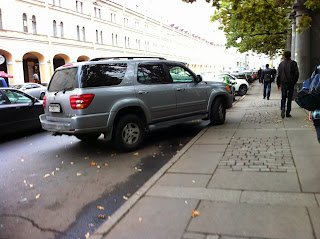 As for food. Things have improved. I would like to say immeasurably but that would be simply lying. We found a kooky little cafe just off the main strip (Nevsky Prospect/Avenue) called Zoom, which had the most wonderfully designed menus, and came in a small paper back book format with children's illustrations (although inevitably one by an adult..) 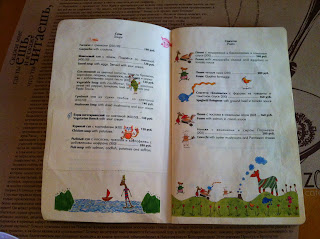 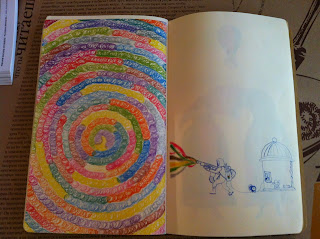 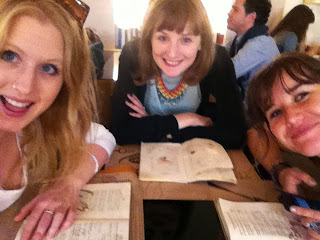 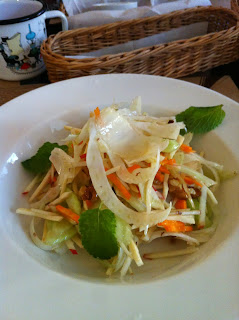 However, I promised you that only 99% of this would be about food, so here is the 1% promised too.

Saint Petersburg, as we know is a cultural powerhouse. There are copious amounts of ballets, operas, statues, churches, buildings, museums and cinemas to visit. The latter example of which I have listed here, Charlotte and I decided to experience for our self!

So we arrived at 'дом кино' (the cinema house) a good 40 mins early, and bought tickets to a children's cartoon called ' Волшебный Лес ' (Magical Forest). After a long gossip and admiring the surrounding architecture, that boasted tall ceilings and a manor-house hall way, with a cafe attached that was decked in red-leather sofas and ruined by a bleak white and soil red contract, that didn't have one solitary picture or decoration (although the creme brulee ice cream distracted us from that.) We then realised that the 40 minutes had breezily passed us by and we decided to look at our tickets. The tickets in our hand we then discovered did not have ' Волшебный Лес ' printed anywhere on them at all... It seemed the woman at the desk had in fact given us the wrong tickets! Or maybe the right ones considering our Russian pronunciation isn't exactly native. So off we hopped to try and rectify this problem and get in for the 3.30pm showing of the children's cartoon we were prepared to wait 40mins for, rather then the 4.45pm showing of an adult thriller that we were not.
On entering the children's cartoon in cinema room number 4, we joined the other 2 people also there to watch the film; a father and his 3yr old son. We then rapidly realised that the Russian film we had come to see was in fact french. Apparently when a film is imported, the original laguage is not dubbed out, but is audiable at the same volume as the language that has been dubbed ONTOP of it. This, French/Russian chaotic combination made the film utterly inaudible. It was also utterly un-watchable and depressing due to the fact that the entire film was about a young boy segregated from society, who lived in a forest with his father that didn't love him and living in the wake of his mother's tragic death. A jolly Thursday afternoon one must say.
Needless to say there were tears of confusion, exhaustion, sadness and more confusion from both Charlotte and I throughout. Well, apart from when we both accidentally had an extended nap half way through in the warm, dark room...

Here is a photo of the cinema house its self : 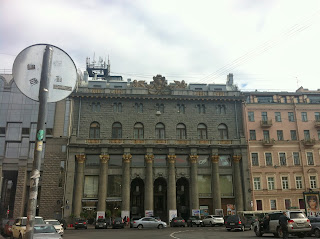 I did however manage to find a beautiful park just over the road from my flat that I had not known existed. I went for a stroll with some fellow language students at the school, and came across a rather romantic bridge: 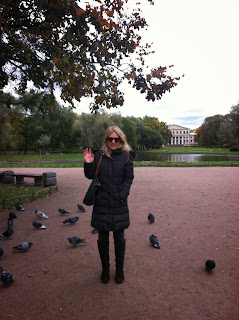 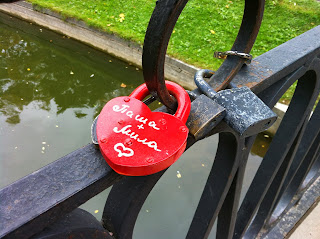 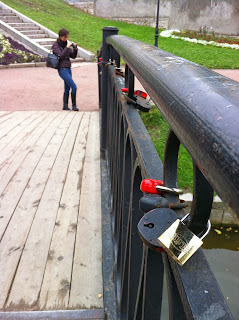 In other news, it's not only walking around and running across roads that I'm doing a lot of- I have also started STRETCHING classes!

Zulaika and I decided to get our bodies into shape and fight off the biscuit bottoms we are slowly acquiring... So we headed off to the local dance studio. Originally, we wanted to Start salsa classes and morph into sexy Latino goddesses once a week starting now and especially during the winter months (when it will hit -20) to fend off the depression and keep our spirits up However Russians decided that Saturdays at 1.00pm was a good time to do that. Which it is not. So, the only other convenient activity apart from gogo/modern and pole dancing of course- was in fact 'stretching.' NOW- if you are thinking to yourself , 'ahh cheaters, what a doss exercise that be pointless,' think again.

One hour of physical pain. We could hardly touch our feet, and at best we tried to do 'the crab', which only lasted for about 3 seconds...
The other women we were about 25, very healthy and fit looking and also rather leggy in their sassy Russian sports gear and tiny sports bras. Our teacher, who shall now be know as Mrs Plasticine, casually, (step by step until we all dropped out) did the side ways splits and then proceeded to bend forward and lie facing downwards with her chest on the floor, arms crossed and seemingly ready for a nap...  Just like this:

The Russian conversation was minimal, however she then decided to ask us what our 'aim' was by attending these classes, and whether we were dancers. Well do we look like dancers to you? 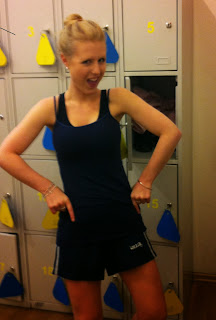 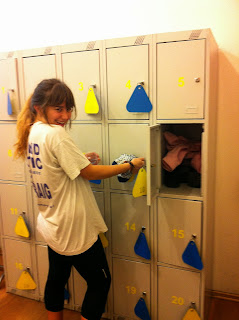 Zulaika then asked why the rest of the girls there were so keen on stretching. Well, it seems we were actually in a class that is extremely helpful for those wanting to improve their nimbleness, flexibility and athletic ability on and around a metal pole....


Posted by Saoirse In Saint Petersburg at 06:11 No comments: 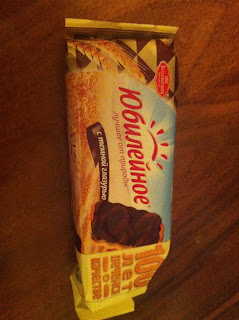 The Russian museum was fabulous as well.. Repin (Репин) being one of my favourite artists was displayed in virtually every room. Bring on the Hermitage ! 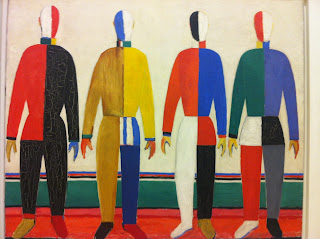 (This is not Repin- I'm afraid I can't remember who this actually is...)
Posted by Saoirse In Saint Petersburg at 11:15 No comments:

1) Men and women here are keen on bright block colour tracksuits. YESSSSSSS I finally have an excuse to wear matching top and bottoms IN PUBLIC.

2) I was in the 5% minority today on my walk to Uni of those who were not wearing ultra high, spindly ankle breaking stilettos.

- I make toast by frying bread in the smallest sauce pan ever invented: 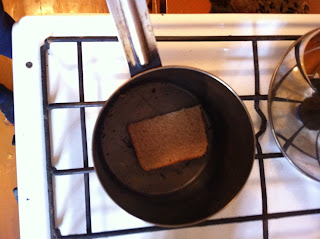 - I also bought a large, white fresh looking bun to have for lunch with my ham and cheese (for the second day in a row) however on opening the 'bun' i discovered to my sadness that it was not quite what i had expected. SURPRISE! : 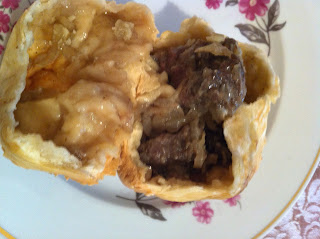 Posted by Saoirse In Saint Petersburg at 04:51 No comments:

My First Few Days in a Far off Land

I know you have all been waiting with bated breath to hear my news, thus, your wish is my command !

Firstly, I thankfully managed to pass passport control/ visa control/ security and scary Russian officers safely and successfully. It seems my sweaty brow and pitiful attempts at speaking Russian did not result in a frisking or any potential problems that I could have encountered upon entering the country.

So, I am currently living in a traditional Soviet-style apartment  in the center of Saint Petersburg, on a canal.
My Babushka is delightful; aged about 65 but honestly more lucid than I am and also rather a lot fitter. On my first morning she briskly strode along the streets of the city with my arm tightly strapped to hers and reeling off facts (I think) at the speed of light in extremely incomprehensible old school Russian. Lucky for me, she speaks 0 English, and is absolutely fooled by my 'I know exactly what you are talking about' face. However, I am considering giving up 'the face', because she seems to expect an answer from me when she asks a question- but, as you can imagine I end up standing there totally stumped and pale faced looking blindly confused.
ALAS! Do not fear, my Babyshka's lack of empathy and wonderful stream of consciousness in Russian may in fact be the best thing for my language improvement!

There is another culture conflict here that i have already encountered. As expected- THE FOOD IS VERY RUSSIAN. For example, my Babushka kindly prepared supper for me two nights in a row - little did i know I was nibbling away at a rather tender and juicy (if not a tad rough and rich) TONGUE on these two consecutive evenings. Now, I am not a fussy eater, but when you accidentally snoop through the jam packed fridge, and upon opening a metal container find a raw cows tongue that will later be prepared for you- it needless to say really puts you off your supper !

NB: This blog is likely to be a food blog eventually, because that is in fact what preoccupies my mind the majority of the time.

Right- UNIVERSITY. This is the part my Grandparents and a few of my Godparents will skip to.
On arrival at Liden and Denz this morning I was handed a test. This came as quite a shock to me as you can imagine, considering I have not dared dive into my Russian vocab revision for 3 months whilst sunning myself in Indonesia....
However, it wasn't as scary as what Bristol teachers prepare for us on a weekly basis on a Frida afternoon at 5.00, so it came as a relief. I am currently in a middle set going over basics, but it is roumered to get a lot lot harder in the coming weeks. The teachers are all young, pretty, feminine and charismatic, which, is practically a polar opposite to what one would be used to Back in Bristol with our ninja teachers.

I'm sure none of you would have read all of that, but next time the blogs will be shorter and snappier I promise. Until then,wish me good luck with the new homework, new food, new experience in washing clothes (all by hand), new keys, new people. new roads, new weather and new living companion....

Much love !
Come back soon !

Ps: I have already made an English buddy; Charlotte. Here we are in front of the Winter Palace on today's excursion. 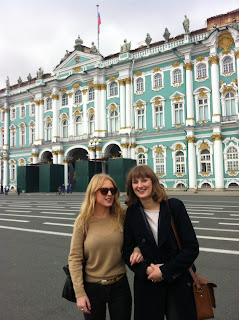 Posted by Saoirse In Saint Petersburg at 11:02 No comments: 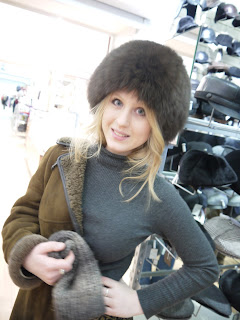 So the excitement begins. . .
Flights booked, suitcase in hiding and visa yet to be sent off.
I shall keep you updated.
Posted by Saoirse In Saint Petersburg at 06:41 No comments: